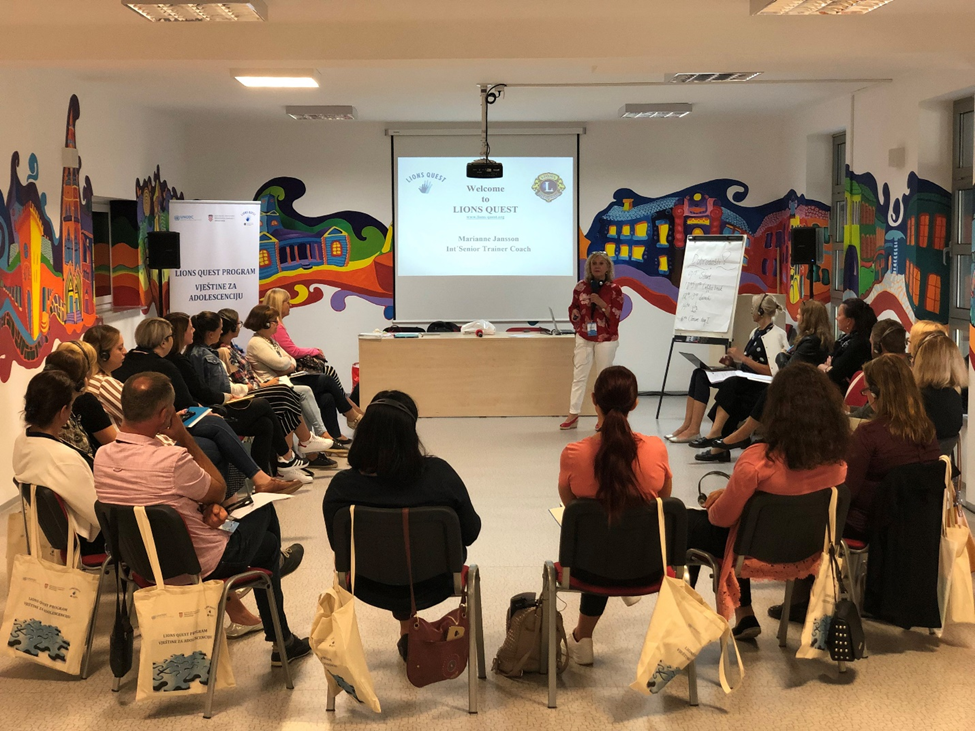 In September and October 2019, Lions Clubs International Foundation (LCIF) and UNODC launched an expansion of Lions Quest Skills for Adolescence in Croatia. The partners, in collaboration with the Croatian Ministry of Science and Education and the Agency for Training and Education (responsible for professional and advisory support for educator), delivered five capacity development workshops across the country. 92 Professionals from 41 middle schools surrounding the cities of Osijek, Zagreb, Rijeka, Zadar and Split were trained. Educators gained extensive knowledge on how to implement Lions Quest curriculum in their schools using the Lions Quest implementation methodology, developed by LCIF, along with evaluation protocols. Trained teachers started implementing the program with their students in November 2019.

Each training workshop lasted three days and involved a selected group of teachers and pedagogues from the nominated middle schools, who will further implement the program over two academic years. In parallel with this implementation cycle, a comprehensive research study will be conducted to evaluate the effectiveness of the project in substance use prevention. More than 2,500 students will take part in the pilot program in the next two years, half of which will directly undergo the treatment intervention. According to the feedback gathered from the pilot, the program will be evaluated and further adapted to fit the Croatian school system.

Lions Quest is an evidence-based social and emotional learning program aimed at preventing drug use among youth. LCIF and UNODC initially launched Lions Quest in South Eastern Europe in 2014 and gradually expanded the partnership to cover Bosnia and Herzegovina, Montenegro, North Macedonia and Serbia, reaching more than 7,000 students in more than 140 middle schools. Following a strict evidence-based modality, Lions Quest has proven to be an effective strategy in reducing substance use and risky behaviors and rightly influencing the normative beliefs of the target groups on substance use. Based on the program's encouraging results in the region, the Ministry of Science and Education of Croatia considered Lions Quest beneficial for the further expansion of prevention strategies in the country, namely a greater inclusion of social and emotional skills education. For additional information, please see the UNODC web story on the event available at www.unodc.org/southeasterneurope by Milos Stojanovic and Diane Sahakian.

To ensure the sustainability and expansion of the project, two local professionals completed intensive training designed for Lions Quest program trainers as part of the capacity development component. After successful completion of the training, they are now national Lions Quest Trainers for Croatia, which supports sustainability of the local program.