Past International Director Lion Svein Berntsen and Charles Wirfts at the March 2022 Ridderrenn in Beitostølen, Norway.

The Ski for Light event is a week-long cross-country skiing program held in the United States at various locations each year. The event attracts upwards of 250 visually- or mobility-impaired adults from the USA and other countries and has been held every year in the U.S. since 1975.

The idea of teaching blind people to cross-country ski began in Norway in the 1950s with a blind Norwegian Lion and musician named Erling Stordahl. He was a charter member of Lions Club Valdres, situated in the beautiful mountain landscape of Valdres, Norway. 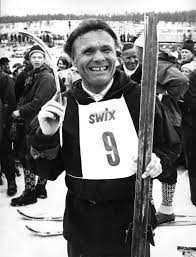 Lion Erling was a very special man who not only inspired Lions, but also the government and the entire nation. Even the king of Norway became one of his biggest fans and supporters. Lion Erling saw possibilities where people usually saw limitations. He said, “We have to change from passive health insurance to active health care.”

In 1964, his work led to the creation of the Ridderrenn, or Ski for Light as the event is called in the U.S., which today attracts more than 1,000 disabled participants and guides from around the world annually to the mountains of Norway in the village of Beitostølen for a week-long event. The event includes cross-country, slalom and other events for visually- or mobility-impaired adults. A special week is now also arranged for children called the Ridder week.

The name “Ski for Light” came from Lion Erling. Instead of focusing on blindness and the absence of light, he focused on the unknown and enlightenment. So, in looking at the Norwegian culture, he created a metaphor from the legend of Peer Gynt. In the legend, a Norwegian knight, the “ridder” part of “ridderrenn,” needed to escape from some bad guys. He came to an abyss and not having any idea of whether he could safely make it to the other side, he leapt with faith and made it safely across the abyss.

Lion Erling equated this with the human struggle and pushed the need for us to try things where success was doubtful, and discover some previously unknown strength or ability within ourselves that helped us succeed. It is the metaphorical struggle from ignorance to enlightenment. So, in cross-country skiing, blind folks are enabled to ski from the ignorance of not knowing anything about the limits of their abilities to the enlightenment of learning that they can succeed at much more than they had ever imagined.

In 1966, Lion Erling inspired Norwegian Lions to collect funds during Norway’s first Red Feather Campaign to be able to build the Beitostølen Health Sports Center (BHSS). Norwegian Lions collected 8 million noks (Norwegian kroners) and BHSS became a reality. Today, it is a leading institution for the treatment of the disabled, with 900 people receiving help annually. The fundraising success was repeated in 2020-2022 by Norwegian Lions to expand BHSS.

The Ridderrenn concept was brought to the U.S. in 1975 through the efforts of another Lion, Olav Pedersen, a friend of Lion Erling. Lion Olav had immigrated to America as a ski instructor in Colorado a decade earlier. He was now a member of the Summit Lions Club in Frisco, Colorado. A committee was formed, enthusiastically endorsed, and encouraged by Norway. The first event was held in Summit County in Colorado and was financially assisted by the Sons of Norway Foundation in the U.S.

Lion Olav proudly welcomed 40 blind Norwegian skiers and their guides to the very first Ski for Light event. Lion Erling and his wife, Anna, were among them. Some expert help from the National Guard also came from Norway to do the technical part of the event.

During the Ski for Light week, each visually- or mobility-impaired skier is paired for the entire week with an experienced, sighted, able-bodied cross-country skier who acts as a ski instructor and guide. The visually- or mobility-impaired person skis in tracks or grooves in the snow, while the guide skis in a parallel set of tracks. The guide informs the skier about upcoming changes in the terrain and trail, offers instructional tips, suggestions, support as necessary and encouragement, and describes the countryside.

This year, I was a ski guide at Ridderrenn in Beitostølen where I met a lot of people from all over the world. One of them made an unforgettable impression on me—Charles Wirfts from the U.S. 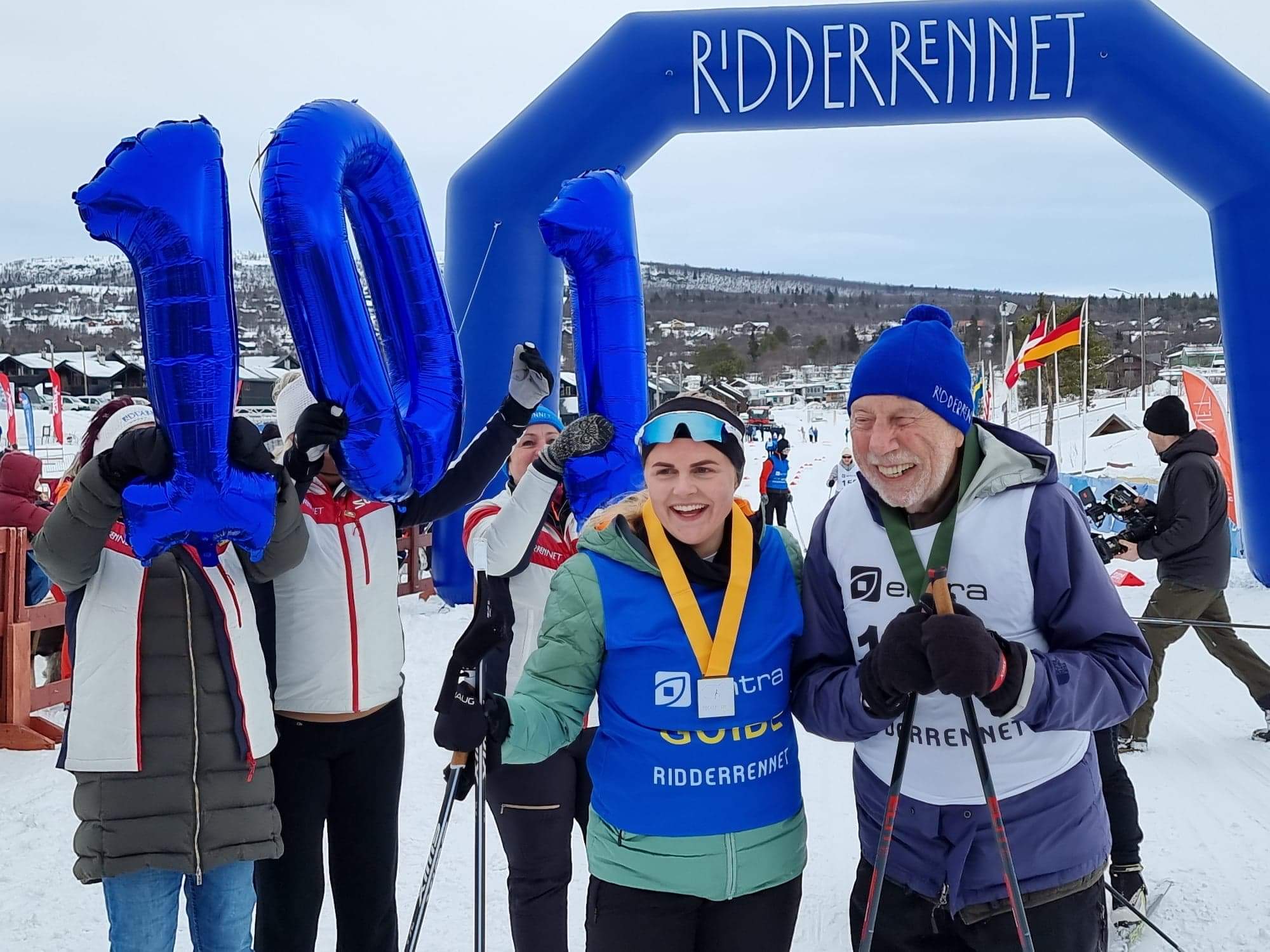 Charles Wirfts and a local ski guide participating in the March 2022 Ridderrenn in Beitostølen, Norway.

Charles is 101 years old. He is blind, but has traveled every year for the last 17 years from New York to Beitostølen to cross-country ski at Ridderrenn. I did an interview with him and gave him a Melvin Jones Fellowship pin. He also participates every year in Ski for Light.

Ski for Light has now been adopted by several countries, such as China and Germany. It makes me proud as a Lion to know that it all started by an incredible Norwegian, Lion Erling Stordahl.

Learn more about Ski for Light.

Past International Director Lion Svein Berntsen is a member of the Lions Club Askøy in Norway.