Ailing from recent health issues, a disappointed Lion John James* could not attend the Melvin Jones Fellowship (MJF) fundraising dinner in early March 2020 (before social distancing measures were in place). This event was where fellow Lions were being honored with their own MJF recognition.

It has the capability to help hundreds, even thousands, of people in need.

Lions Clubs International Foundation (LCIF) Chairperson Gudrun Yngvadottir and Past International President Barry Palmer were attending the ceremony to present the plaques and “pin” the Lions’ newly earned MJF pins to their lapels. John was supposed to receive his MJF recognition that night but was resigned to having to wait until another time. Then, he heard a knock on the door.

To understand why that knock was so important, you have to first understand something about John James. A hardworking and dedicated Lion since 1983, John is known to his fellow Lions as a “doer.” For starters, he has served as his club’s president 10 times. For the past four years, John and his wife Judy have hosted a barbeque every Saturday morning, which raises funds and provides 100 free breakfast sausages to less fortunate members of their community.

However, in the fall of 2019, John suffered from several life-altering medical events. He was saddened that he could no longer host the weekly barbeques, much less leave his home. This also meant missing the Melvin Jones Fellowship dinner and fundraiser. 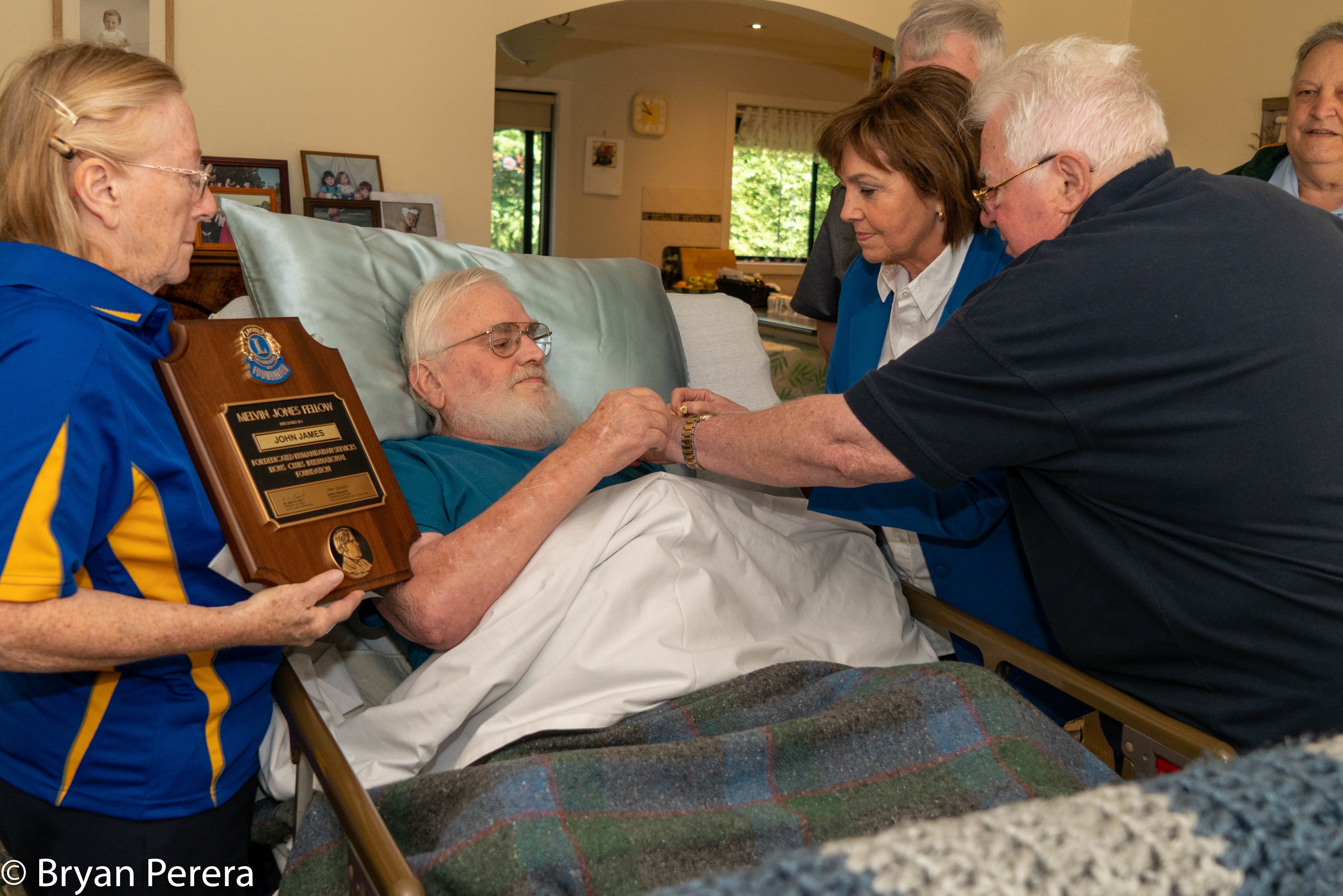 Now back to the knock. Much to John’s delight, that knock at the door was from LCIF Chairperson Gudrun and Past International President Barry. They made a personal trip to his home to present him with his MJF plaque, and to officially “pin” him!

According to Judy, John was “over the moon” from the special visit. He even sleeps with his recognition letter under his pillow, a testament to how deeply proud he is to have achieved a Melvin Jones Fellowship.

For those who are unfamiliar, an MJF is an honor that indicates a person has gifted a minimum of US$1,000 to LCIF. This gift has the capability to help hundreds, even thousands, of people in need. It empowers Lions to serve with deep, long-lasting impact.

Lion John James’ friends talk about how deserving he is of this recognition and this special visit. “He’s a good Lion,” says Past International Director Ian Gration, a friend and current president of John’s Lions club. “He is very loyal to any cause he takes on.”